In this seemingly contradictory area, there is no question of putting yourself at risk to gain a few grams. That would be silly. But we will see that it is not appropriate to load up for nothing either.

Unnecessary clutter always comes from fear. In this case, the fear of lack. To free oneself of this fear is therefore to become lighter.

You may say that this is a beautiful truth, but how can we do it?

Well, thanks to this marvellous tool that evolution has given us: our brain. Faced with fear, rationalising is always the best antidote.

First of all, let’s remember the following rule: you can survive up to 3 days without drinking water and 3 weeks without food. It’s a known fact. Validated. Let’s have a thought for the guinea pigs…

From there, we wonder: depending on the context in which we are about to evolve, what are the objective risks of going three days without water and three weeks without food?

For water, it can sometimes be complicated. We’ll come to that. As far as food is concerned, however, in the majority of destinations, it’s simple: no risk.

As soon as you can stock up on food regularly, there is no need to carry kilos of food. A few snacks will compensate for the closed shops or dead villages while waiting to find a refuge, a restaurant, a bakery and delicatessen…

So, I only have two bags with me. One contains 300 grams of dried fruit, a mixture like this one:

– Goji berries, cranberries, physalis and mulberries – with sultanas, which lasts me about ten days – and the other contains 200 grams of salted peanuts, which are an ideal appetite suppressant for me. On hot days, the salt content also helps me to retain water and avoid cramps. In the mountains, I also take a sausage and I last about a week on it. It’s less romantic than the Indian pemmican but it goes better with my Basque beret. That’s all and that’s enough.

So, as far as kitchen utensils are concerned, I only need this, in addition to my Opinel:

The titanium metal fork (20g) is a gadget that smells of adventure but which I got rid of: it’s bulky and heavy, compared to its plastic counterpart (8g), which is enough for me to pick through trays of grated vegetables, rice salads or tabbouleh bought in the grocery shop.

Some people will object that a hot soup in the evening in the mountains is useful for warming up. Let’s admit it. But a good duvet will also do the trick. Who sleeps dines, as the saying goes. And then you can also have a hearty meal (and a hot shower) in a refuge and go back to pitching your tent in a bivouac area – especially when, like me, you don’t appreciate the collective snoring in overheated dormitories.

The same goes for the hot coffee in the morning: it does nothing for me. I prefer to start walking again after a few handfuls of dried fruit and a large glass of fresh water, knowing that in three or four hours at the most, I’ll arrive on a welcoming terrace, facing south, and that there will be blueberry pie with the espresso. Or maybe some cold cuts and a beer. 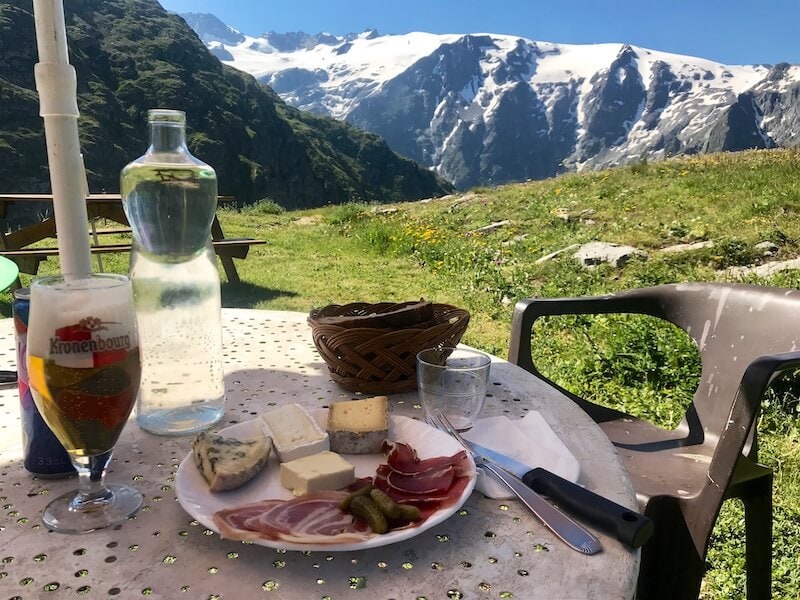 Let us therefore eliminate the gargantuan provisions. No more tins of cassoulet or freeze-dried diets for amateur cosmonauts. Let’s recharge as we go along and if, through lack of luck, we end up pitching the tent without having been able to eat anything other than seeds, we’ll say to ourselves that all experience is good to take and that there are, throughout the vast world, situations that are much more dramatic than ours.

Of course, if the stages are only marked out by wild campings without town for three or four days, one will reconsider the package.

Here is what I used to use before and that I still find very practical even if I don’t use it anymore. I’ve kept it in anticipation of escapades (canoeing for example) where supplies may be more hazardous for a day or two.

This is an Optimus set, which contains a pot, pan and frying pan – but the frying pan is really just a lid and I eat from the pot – and a micro stove with a cartridge. The pan has a very convenient bottom that encloses the flame and optimises the boiling time, which saves heating time and therefore gas.

The stove itself is tiny.

The whole thing weighs just under 800 grams, to which I add 200 grams of ordinary wheat semolina (wholemeal semolina does not suit my taste): very quick to cook, this food offers a good supply of slow sugars and fills the stomach well. I add powdered chicken stock and cumin to make it less bland and carry it in a freezer bag. For one kilo more, I have enough to face several evenings.

Some ultralight hikers cobble together an alcohol stove in an aluminium can. The weight is negligible, even if you count the jellied alcohol. I’ve never tested it but I’m seriously considering it. You can easily find videos on Youtube which show you how to build it.

Another case: the desire to be autonomous, even autarkic, and to cross paths with civilisation as little as possible. This is a very respectable choice. The kit mentioned above, including semolina, will do the trick. We will improve the ordinary with animals killed with the Opinel knife, in fair hand-to-hand combat where the bear has every chance.

The problem is binary: drinking / non-drinking.

Either you are in an area where drinking water is regularly available and you will only need a water bottle – or two, as we will see in a moment – or you are not sure that the water is safe and you will need to equip yourself with some accessories.

Note, however, that even in very civilised areas, the search for water can be complicated, as experienced on the Route de Saint Lu.

The same is true in some European countries where, due to the ravages of intensive agriculture, tap water is not even recommended for cooking pasta.

I abandoned the use of the water bag with pipette that allows you to drink without removing the bag because I realised that because of it, I hardly ever took a break. I drank while walking, until I was exhausted. However, the fact of stopping, pulling the water bottle out of the bag and enjoying the landscape while hydrating is a necessary and pleasant interlude, for the body as well as for the brain. Back to the bottle, then.

The Platypus ones are perfect. Inexpensive, very light (24g) and above all: foldable and resistant. Having two is practical for many reasons: you can fill only one and roll the other in a pocket if access to water is easy; you can fill both when water is scarce or before reaching the bivouac; finally, you can also, when the quality of the water is not assured, wait for the disinfectant tablets to act in one while you still have something to drink in the other.

Good transition for the next part, namely :

By dubious water, I mean only clear water: muddy or stagnant water must be avoided at all costs or filtered by complex processes that I do not intend to detail here. Take a look at the survival enthusiasts who will be able to explain all this to you much better than I can.

You can choose to carry a filter. This is only really relevant if you’re walking in the wilderness for several days without coming across any houses. I first had the one below but it’s slow (you have to pump, pump, pump before you can drink…) and quite bulky and heavy.

This is the Trailshot model from MSR. 140 grams. Following a meeting on the GR 54 with a hiker who is also a fan of lightness, I definitely opted for the Micro squeeze filter from Sawyer. Very small, negligible in weight (46g), it has the added advantage of being screwed directly onto the water bottle or a PET bottle such as Perrier and you can drink straight away.

At the same time, in the Alps, or anywhere else when I find the water a bit dodgy (river in particular), I also use disinfectant. This one, for years:

I only take one wafer. Or even half a tablet, depending on the context. In thirty years, the manufacturer has made great progress and disinfected water smells much less like chlorine than it used to.

A quick aside about mountain streams with apparent Evian water: in the past, I considered reliable those that flow at an altitude of more than two thousand five hundred metres, obviously flowing from a glacier or a nevé clinging to a steep scree, and above which no herd has been able to graze and croak. Today, I am even wary of the latter. A bird carrion may be lurking there, invisible and insidious. So I systematically filter the water.

Why do I do this?

Because of a wonderful Saharan experience, almost thirty years old, during which a large glassful of pure oasis triggered three months of dysentery and made me drop below sixty kilos – a diet that would have worked, if it weren’t for the knitting needles that were digging into my belly. Since then, I’ve become very wary. Or very wise.

We’ve almost covered it all. I still have to tell you about the accessories that are indispensable to me and that will be the subject of the last article. 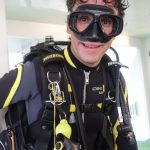